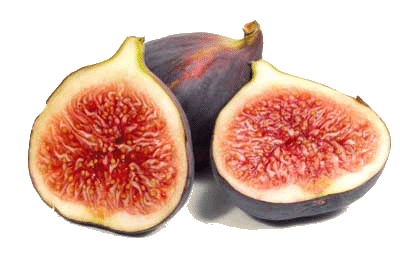 Figs are thought to have originated in Egypt. They eventually made their way to ancient Greece around the 9th century where they became a staple item in the Greeks’ diet. They were so revered in Greece that laws were created to forbid the export of the highest quality figs. They were finally brought to California in the late 19th century by Spanish missionaries who planted trees at their mission in San Diego. These figs were not of the same quality as the European varieties and did not flourish. It wasn’t until the 20th century that improved cultivation techniques allowed for the growth of figs suitable for widespread consumption.

Varieties Available
Black missions - One of the sweetest varieties commercially available. Their skin ranges from black to purple in color, with a pink to light red pulp. This variety is well adapted to hot climates, so they do well in both California and Arizona. This variety has two crops every year with the first producing larger sized fruit than the second.