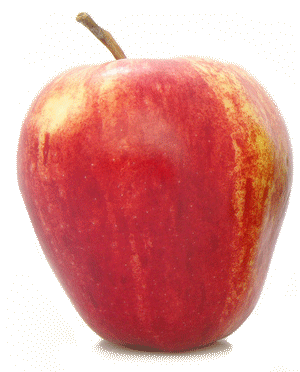 The apple is one of the most widely cultivated and consumed fruits in the world. Its origins are disputed- some believe it was originally cultivated in Rome, and others trace its origins to Western Asia. Today, apples are grown in almost all moderate climates around the world. Currently there are around 7,500 varieties seen throughout the world with about 100 varieties grown for commercial trade in the United States.

Varieties Available
Gala - Gala apples are yellow with a mix of pink and orange. They have a thin skin, a crisp fresh texture and a sweet flavor. Thought to be one of the best apples for fresh eating.

Fuji - Fuji apples skin can be varied from a yellow with some red highlights to almost completely red. It also can have some green tint to it. Their skin is slightly thicker than others so it holds up to baking well. Its texture is dense, crisp while the taste is a mild sweet.

Cripps Pink - This variety gets its name for the pink blush color, and may also be marketed as a Pink Lady. They have a firm texture, are juicy, and have a sweet yet tangy flavor to them.